Over the weekend, it was a busy time for our seniors, with our first ever QLD brown & black belt training intensive.  It was great to fill the dojo with most of the seniors from Sunshine Coast and Gold Coast dojos.  After the first 2 hour session on Saturday morning we had some time scheduled for a black belt grading.  There was just one person stepping up to grade:  Sam Hunt.  Plus there were a number of others seniors stepping up to do practice gradings.

And we are pleased to announce that Sam Hunt has successfully passed his black belt grading. 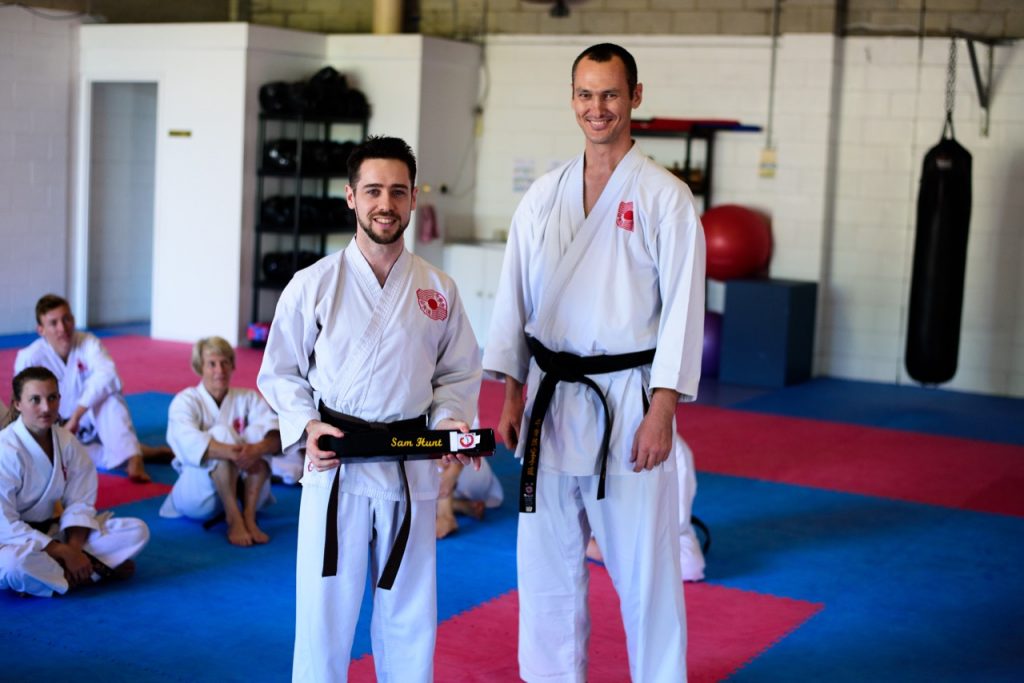 For nearly everyone who steps inside a karate dojo, black belt marks a major milestone in ones journey.  Many people aspire to become black belts, but in reality not many people actually make it there.  It’s usually only about 1 in 100 people that have what it takes to become a black belt.  It’s not because it’s an impossible journey, but because it takes a special kind of person to do what it takes:  hours of practice, perseverance, facing emotional challenges.  While achieving the rank of black belt is a great thing, the thing that one most remembers is not usually the achievement itself, but the journey to get there.

The journey to black belt requires people to break down everything that they are and reinvent themselves. Quite literally, it is a journey of blood, sweat and tears.  In pushing the physical boundaries and developing your technique you are forced to take a good hard look at yourself and in many cases make some big changes.  I think this is why so many people never make it to black belt, because it really can be very confronting to take a good hard look at yourself in the mirror.

Even though the journey can be tough it’s worth it.  Everyone that I’ve ever met who’s graded to black belt has had a different journey to get there.  Everyone has faced challenges of some kind, and everyone has had to grow and change in some way.  In this regard, Sam is no different.

Sam’s karate journey began just over 3 years ago.  Prior to that he’d never stepped into a dojo, although he did come in with a good level of fitness, co-ordination and body control, which often takes some time for many people to develop.

Even with such a good starting point, it was clear from his first very early on that Sam was doing some important things that have helped accelerate so quickly towards black belt.  Just to set the record straight, in Chito-Ryu, 3 years to black belt is very quick.  In fact the average time for those that have graded to black belt in our dojo has been around 7-8 years.  With this in mind, we’d like to share some of the things that have helped Sam move forwards so quickly.

To put it in simple terms, Sam has a great training attitude.  Just a few weeks after Sam was invited to step up for his shodan grading, he entered a tournament and broke one of his fingers.  Then, the following week we had a visit from guest instructor from Canada, Mitchell German Sensei.  Even though the focus for most of the week was kumite, Sam didn’t miss a lesson.  There was quite a bit of one-handed kumite, but he didn’t miss.

In the final weeks leading up to his grading Sam continued to train, without missing.  His finger was slowly healing, but even in the final week of training he still couldn’t make a full fist. Not the ideal preparation, but it was a clear sign of his determination showing through.

For those who’ve had the opportunity to train along side of Sam, I’m sure that everyone would agree his promotion to shodan is well deserved.  So with this in mind, I’d like to say once again… Congratulations Sam.

Here are just a few photos of Sam from throughout the weekend during his grading and the senior training intensive.  A big thank you to Adam Sensei for capturing these photos.