What an amazing experience. There’s no other way to describe it.

For our Sunshine Coast Team, it was the culmination of over 12 months commitment, training together, growing skills and preparing to compete in the highest level of competition in the Chito-Ryu world.

Nearly half of the team were competing at their very first Soke Cup. Hopefully, the first of many. And for the first time ever, every single time member came away from the event with at least one medal. Many earning medals in multiple events.

Let that sink in for just a bit… every single one of the 13 competitors from the Sunshine Coast earned a medal in this international event. Incredible!!

The final medal tally for Sunshine Coast competitors at the 2019 Soke Cup (including a few teams with members from other Australian dojos).

The Soke Cup is not just about competition though. It’s a gathering of the international Chito-Ryu community. A chance everyone to build life-long friendships with other people from around the world who share a passion for the study of Chito-Ryu Karate-Do.

For the Sunshine Coast Team this started early in July when Sensei Martin & Senpai Sami travelled ahead of the rest of the team to train for 2 weeks with Taneda Sensei and the members of the host dojo for this year’s Soke Cup. This was a great opportunity to get to know Taneda Sensei and his students better, grow friendships, take part in dojo activities and training, plus also enjoy some of the natural beauty of the Okanagan region.

In the final week leading up the tournament the rest of the team arrived and so did teams from all around the world.

During our first couple of team training sessions we were joined by Trond Sensei from Norway. Over the years we’ve had the pleasure of training with him in Japan and getting to know him at previous Soke Cups and other international events. It was a pleasure having the opportunity to receive words of wisdom from him before the tournament.

On the Wednesday before competition started all of the Australian dojos came together for some national team training in the park. As a bonus, a local journalist came along took some photos did an interview and we made the news.

There was also a good write up about the tournament, a few days later, once competition started on the PentictonNow.com website.

On the Wednesday afternoon, senior instructors from around the world were invited to be amongst the first to see the tournament champion trophies to be awarded to the overall top competitors at the end of competition. It was an honour to be present at this unveiling as the Penticton Indian Band (the sponsors), presented the trophies.

On Thursday before competition, it was a big day of events. The International Clinic with Soke, starting with morning meditation on the shore of Lake Okanagan from 6am, followed by breakdown of Chinto kata & bunkai.

The international clinic finished just before lunch. From there were a number of people who attempted senior gradings. From Sydney, there were 3 people who successfully graded to both black belt (shodan) & jun-shidoin (instructor): Senpai Ray Ng, Senpai Stephen Grubmier & Senpai Nicholas Onie.

There was an International meeting with delegates from around the world. And the day finished with a reception for all volunteers, officials, dojo instructors & VIPs.

Friday saw the start of competition. In the morning, the first half of the day was an international referee clinic. Competition started at lunch-time with just a half day of events. We only had a couple of Sunshine members competing on the first day, but they got off to a great start, with both progressing through to finals on Sunday with guaranteed medals.

Saturday morning was the official opening of the tournament: march in ceremony, speeches. Competition continued throughout the morning. During the lunch break were demonstrations from Sodai, Higuchi Sensei & Soke.

More great results from Sunshine Coast competitors throughout Saturday. More people through to the finals, and several 3rd place finishes.

Sunday morning started out with a couple of presentations before competition. On Friday, Soke passed on some new black belts for a couple of Queenslanders who graded earlier in the year. Before competition started, we gathered together Gold Coast & Sunshine Coast dojos to review the results so far and also make the presentations to Senpai Sam Phillips who had graded to Jr Shodan & Senpai Samantha Lenton who had graded to shodan.

With competition drawn to a close for another Soke Cup, there was a little bit of a break before everyone started getting ready for the banquet. As always, the banquet was a lot of fun. Great food, good company, gifts being exchanged, dancing, presentations of the tournament champions and also announcement of some senior gradings.

The following people from around the world successfully passed senior gradings:

Noonan Sensei’s grading to the title of Kyoshi marks a very significant milestone for Australian Chito-Ryu. He is the only Australian ever to be graded to that level and he joins a very small group of others around the world currently at the level.

This significant achievement is the result of 40 years of relentless, consistent training in pursuit of the Chito-Ryu technique.

After a big night of festivities on Sunday night, come Monday, it was time to say goodbye for many people.

Before heading home, we had one final stop to make. Sensei Klaudia Caston will be staying on in Canada for the next 2 years, working and travelling throughout Canada. But before she left for Canada, she successfully passed her nidan grading. We were very fortunate to receive Sensei Klaudia’s grading certificate from Soke in time to make an informal presentation.

Sensei Klaudia is definitely going to be missed in the dojo. We’d like to wish her all the best. We’re already counting down the days until she gets back into the dojo at Sunshine Coast Karate.

On final congratulations to all Sunshine Coast & Australian competitors at this year’s Soke Cup. It was a pleasure to share the experience with everyone.

Also a big thank you to Taneda Sensei, Senpai Mike, Senpai Michelle and everyone else who worked so tirelessly to make this Soke Cup such a great success and a memorable experience for everyone involved.

We look forward to the next Soke Cup in 3 years time to be held in Japan. 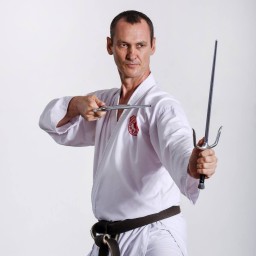