For those of you who have been training for a while, you probably noticed that a few months ago we changed the Showa up on the wall in the dojo.  One of the most striking differences, is that we no longer have the an English translation up on the wall.  The reason for this is quite simple, for a lot of the words contained in the Showa, there is no simple English translation.  So rather than practice a poor translation, we wanted everyone to study the meaning of a the Japanese version of the Showa more closely.  However, in doing, we also realise that student’s need a starting point in trying to gain some understanding of the meaning of the Showa, so that’s what this page is all about.

The Chito-Ryu Showa is a poem written by O Sensei, that is repeated by all students in Chito-Ryu dojos around the world at the end of training. In short, it sums up the philosophy of Chito-Ryu and reminds us all that if we train with these principles in the forefront of our mind we are certain to achieve our goals. The video below will help you with the pronounciation of the Showa in Japanese and give you a simplified translation into English.

The showa is not something that can be easily translated into English, because we just don’t have the equivilent of many of the key words and phrases that are used. So, when reading the English translation provided here, please keep in mind this is only meant to be a very simple translation to capture both the essence and the tone of the meaning that is implied. Throughout your study of Chito-Ryu Karate-Do you should continue to seek deeper and deeper understanding of the Showa and it’s meaning as it applies to your own personal journey.

For your convenience, here is a downloadable version of the Chito-Ryu Showa (Japanese & English) [PDF file].

Some of the key words/phrases from the showa that are not easily translated into English and that you may want to further study are:

Over time the showa has changed a little, but the key philosophies have not changed. For example, in recent years, the first line of showa changed slightly from: Ware ware karate-do wo shugyo suru mono wa to Ware ware chito-ryu karate-do wo shugyo suru mono wa. This slight change was introduced by 2nd Generation Chito-Ryu Soke because the philosophies of the showa apply specifically to students of Chito-Ryu. Other styles may also adopt similar philosophies, but it cannot be assumed that these principles apply to ALL students of karate-do, because not all styles are the same.

One of the key philosophies of Chito-Ryu is the spirit of Wa and Nin (peace and perseverance). Perhaps this is a legacy of the post World War II era in which the the Chito-Ryu system evolved, but it is timeless wisdom that is essential in understanding Chito-Ryu. Even now the current Chito-Ryu Soke (2nd Generation) continues to remind us constantly to study and practise the principles of Wa and Nin. As a reminder, a few years ago, Soke Sensei presented us with a small gift of some of his calligraphy featuring the character Wa and Nin (pictured below).

The concept of “bushido seishin” is often translated as the spirit of the samurai and this is something that carries with it many different meanings and is often misinterpreted.

The samurai were a very cruel and ruthless bunch in addition to being noble.  Many westerners are unaware of such practices as “kiri-sute gomen”, the right of samurai to kill commoners for perceived affronts, but this type of egotistical behaviour does not align with O’Sense’s other teachings.  Bushido is also giving up your life due to failure, “seppuku”, but Soke completely rejects that. It’s also obeying an order that one knows is completely morally wrong, such as executing children.

Ultimately no one knows exactly what O’Sensei has in mind when talking about bushido seishin, but through training and striving to understand perhaps we develop our own meaning.  Perhaps it we should be striving towards the indomitable fighting spirit of the samurai, or maybe O’Sensei intended us to consider the samurai virtues: 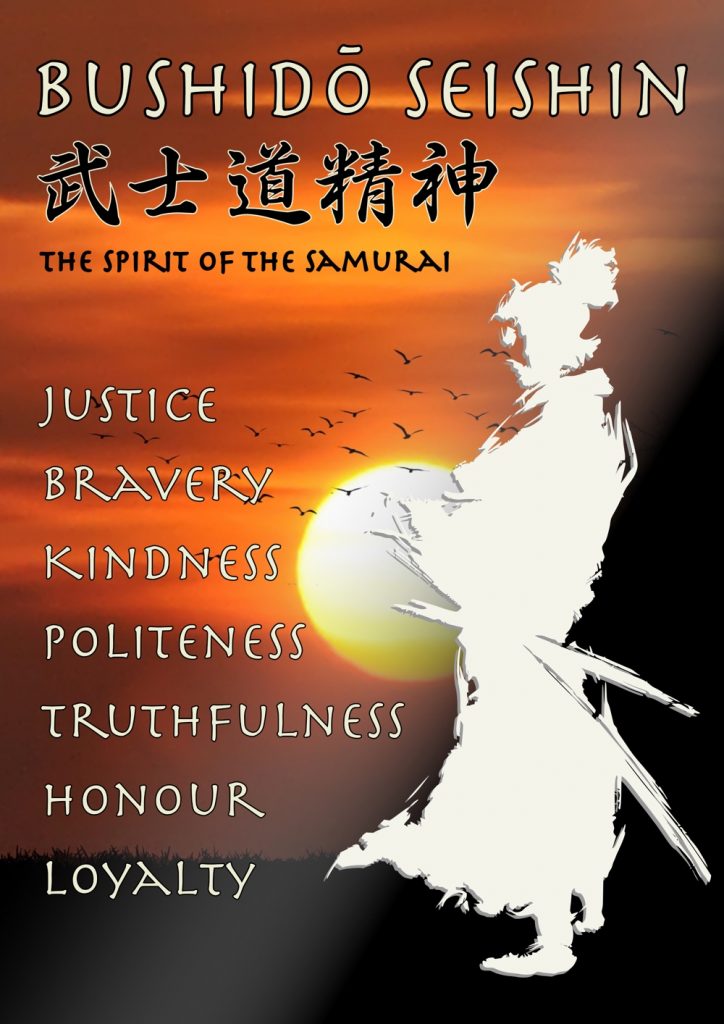 The photo below shows another one of the key philosphies contained in the showa “Rikihittatsu”, up on the wall on the right side of the photo. “Rikihittatsu” basically it says, “If we work hard, we are certain to achieve our goals”. These 3 kanji characters are read by most Japanese people as “Rikihittatsu”. But the way it is read in the showa, “Tsutomereba kanarazu tassu”, is a very stylised way of reading this combination of characters which I believe is unique to those familiar with the Chito-Ryu system. As a style, Chito-Ryu originated in 1956 when O Sensei opened his dojo the Yoseikan. But this philosophy has been with O Sensei for much longer as evidenced by the fact that the photo below was taken over 20 years earlier.

Over time your study of Chito-Ryu becomes a very personal journey of self discovery and the Showa is a central piece which will help guide and direct you throughout your studies. So, every time you say the showa, be careful not just to repeat it parrot fashion, take a good look at it’s meaning and keep searching for more.